You probably noticed a flurry of media activity yesterday around the release of a new report from the Foundation for Young Australians (FYA).

The New Work Reality report followed 14,000 young people’s journey over a decade (15 to 25 years old) and found that only half of 25 year olds have full-time secure jobs even though 60% have post-school qualifications.

Describing these 25 year olds as experiencing a “quarter-life crisis”, the report notes “this ‘crisis’ period of the mid-twenties is characterised by insecurities, disappointments, loneliness and depression. The stark reality is that today’s generation of young people is the first to be worse off than their parents on a number of key social and economic measures.”

The report focuses on four significant factors that can accelerate the speed of transition from full-time education to working full-time hours.

Enterprise skills: programs that teach enterprise skills (such as problem-solving, communication and teamwork) can increase the speed of attaining full-time work by 17 months.

Future focussed clusters: by choosing employment with a strong future focus a young person can speed up the transition by 5 months. FYA’s previous research identified three clusters of jobs that are more future focussed: The Carers, The Technologists and The Informers Young people who chose work within these clusters transitioned faster. 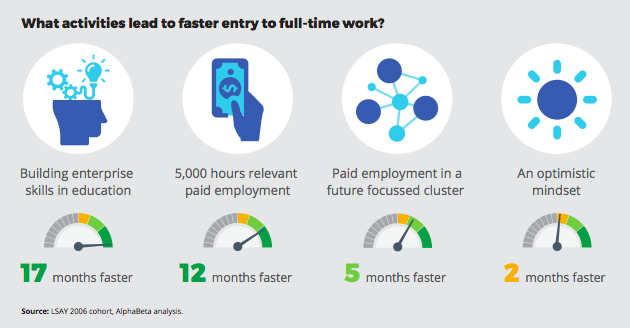 I expect there will be a healthy critique of the report and I look forward to hearing your thoughts.

3 Comments on “The New Work Reality”

Back to Dean’s News

Subscribe to the Dean’s news feed. You will receive a weekly digest of all the posts in this feed.